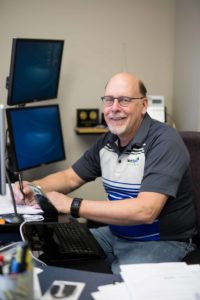 His working career began with Bell Labs in Chicago and later he joined General Motors, AC Rochester where he worked as a Senior Manufacturing Engineer.  Bob left GM in 1993 and formed NetSys+.

As Bob will tell you, his experience entitles him to say, "Been there, done that".

Bob is a director of the Sioux City Relays and enjoys providing electronic timing services for local schools and colleges in his spare time. 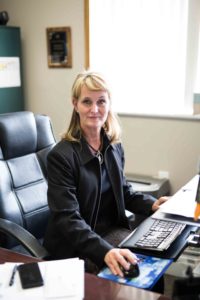 Chris Prince likes to say Bob used to work for her.  As the CIO of a multi-specialty clinic, she hired NetSys+ to help merge a group of clinics under the same organization.

Eventually she went to work for Bob and the rest is history.

Needless to say, this brought experience and knowledge of the  healthcare industry to the company.  As V.P. of Operations, she provides both operational and business support for the company

Chris is President of the Morningside Commercial Club and serves on the Sioux City Relays Board of Directors.

Darren Meister has a degree in Computer Programming from Western Iowa Tech and has been with NetSys+ since 2003.  His certifications include MCITP, VCP, BCNE, and A+.  Prior to joining our group, he worked for and gained experience in medical and manufacturing environments.

In his role as V.P. of Engineering Services, Darren’s technical skills, professionalism and attention to detail make him a vital asset to the NetSys+ team.

Wendel Kahl graduated from WestMar University in LeMars IA with a degree in Computer Science.  After college he went on to work for different companies in a wide variety of technology fields.

Wendel is an MCSE(Microsoft Certified Systems Engineer). With his unique blend of experience in medical, private, and municipal IT realms, he provides  leadership and skill to the NetSys+ Team. 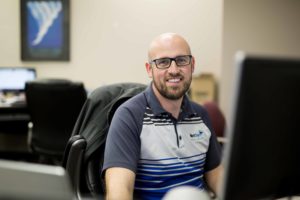 Gabe Demarest graduated from the University of Northern Iowa with a degree in Leisure, Youth, and Human services in 2008.  Shortly after that, he went back to get a second bachelors in Systems and Network Administration from Bellevue University, Nebraska.  While attending college, Gabe worked in  IT departments for Higher Education and later in K-12 Education systems.  After completing his degree, he began his professional IT career with an Iowa hospital.  Gabe has certifications with Microsoft and Fortinet.

As a member of our NetSys+ leadership team, Gabe’s patience and technical skills along with his natural ability to lead provide an exemplary model for us all.